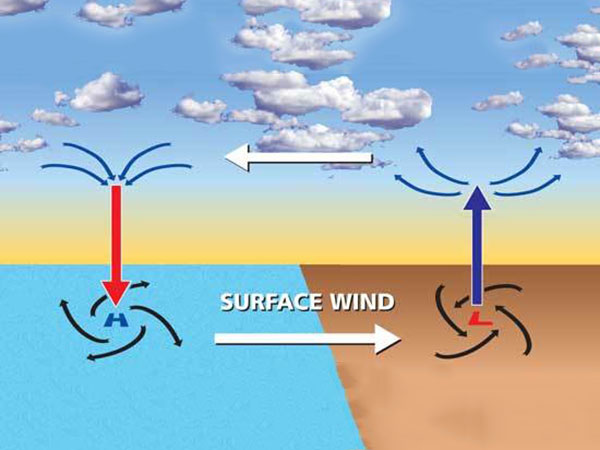 Wind and its formation process

Atmospheric circulation is the global circulation of air. Studies have shown that the macroscopic movement of the atmosphere around the earth is the combined result of the following two forces:

(2) The earth never stops rotating and exerts a horizontal force in the same direction as its rotation on the atmosphere above the earth. People call this force the geostrophic deflection force or Coriolis force. Under the effect of the deflection force of the geostrophic force, the airflow in the northern hemisphere of the earth deflects to the right, while the airflow in the southern hemisphere of the earth deflects to the left.

Figure 1 shows a schematic diagram of the formation and direction of atmospheric circulation on the earth’s surface. It can be seen from this figure that under ideal conditions, the earth’s surface is surrounded by three atmospheric circulation circles, namely the equatorial trade wind circle (equator to latitude 30°), the mid-latitude prevailing westerly circle (latitude 30-60°) and polar east wind circle (latitude 60~90°). This is the famous “three-circle circulation” theory. Of course, the “three-circle circulation” is only an ideal circulation model. In fact, affected by factors such as topography and oceans, such as uneven distribution of land and sea, the difference in temperature changes between oceans and continents, and the diversity of continental topography, the actual circulation is much more complicated than the ideal model.

The local wind is a small-scale local circulation. Due to the different nature of the underlying surface in a small area, local circulations are often formed. The most common ones are sea-land breeze and valley breeze. The details are as follows: