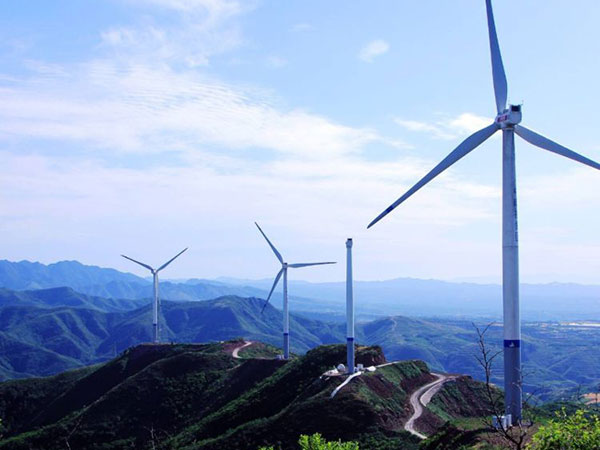 The latest development of wind turbines

Figure 1 shows the schematic diagram of the brushless doubly-fed generator. Two sets of independent three-phase windings are placed in the stator core slots of the generator. One set of windings is directly connected to the grid and is a power winding. The outlet terminal is denoted by A, B, C, and the number of pole pairs is p; The converter is connected to the power grid and is the control winding. The outlet terminal is represented by a, b, c, and the number of pole pairs is pc. There is no direct electromagnetic coupling between the two sets of windings, but indirect coupling through the magnetic field modulation of the rotor to achieve energy conversion. Generator rotors are divided into two categories: cage rotors and reluctance rotors. The rotor in Figure 1 is a concentric short-circuit cage winding structure. Cage rotors can be divided into independent concentric cage rotors and independent concentric cage rotors with common end rings according to different winding connection rules. As shown in Figure 2, two schematic diagrams of winding connections and three-dimensional effects are given. Reluctance rotors can be divided into salient pole reluctance type, axial laminated reluctance type and radial laminated reluctance type. Figure 3 shows a schematic diagram of a radial laminated reluctance rotor.

In addition to the more common six-phase dual-channel systems, some scholars have proposed more phases of wind power generation systems, such as nine-phase permanent magnet synchronous generators and twelve-phase permanent magnet brushless DC generators. According to the number of generator phases, multiple groups of three-phase systems can be formed, with multiple channels running in parallel, as shown in Figure 5.

In addition to increasing the capacity, the use of multi-phase generators can also improve the reliability and operating efficiency of the wind power generation system. In Figure 5, if one-phase winding or power converter in a certain group fails, it can be based on different fault conditions, or all three-phase systems in the group can be removed, and the remaining healthy three-phase windings will still work normally; or only the faulty phase is disconnected, and other healthy windings are kept in normal operation, so as to avoid the phenomenon that the wind power generation system fails to cause the entire unit to shut down. This is more meaningful for offshore wind farms, because offshore wind turbines are inconvenient to maintain due to environmental factors. Once a wind turbine fails, it may be shut down for several days or even dozens of days, which seriously affects the efficiency of wind energy utilization. The use of a multi-phase multi-channel system can only cut off the faulty phase or group, while maintaining the normal power generation of other healthy phases.

In summary, the generator adopts a multi-phase winding (or multiple sets of three-phase winding) structure, which can reduce the capacity of the power converter, reduce the rated parameters of power electronic devices, save costs, and improve the redundancy and reliability of the wind power generation system .