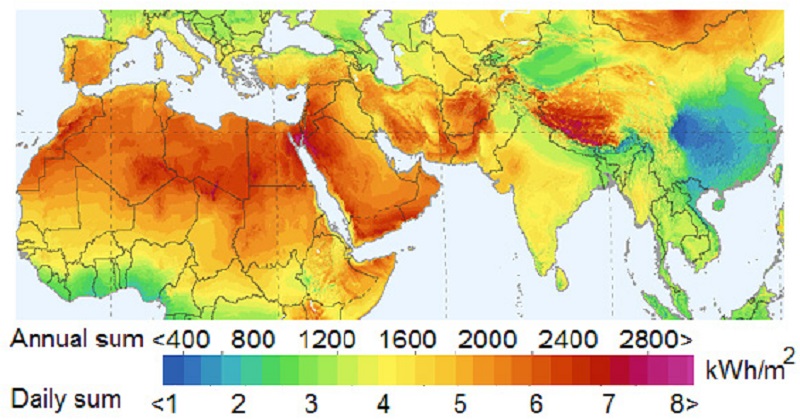 Although the energy radiated by the sun to the earth’s atmosphere is only 1/2.2 billion of its total radiant energy (about 3.75 X 1026W), it has reached 173,000TW, which is equivalent to the energy released by the complete combustion of 5 million tons of coal. Figure 1 shows the energy flow diagram on Earth. It can be seen from this figure that the wind energy, water energy, ocean temperature difference energy, wave energy and biomass energy and part of the tidal energy on the earth all come from the sun, even the fossil fuels on the earth (such as coal, oil, natural gas, etc. ) is basically the solar energy stored since ancient times, so the broad scope of solar energy is very large, and the narrow solar energy is limited to the direct conversion of solar radiation energy of photothermal, photoelectric and photochemical.

Studies have shown that the distribution of solar energy resources on the earth is not very uniform. In general, the southwestern United States, Africa, Australia, China’s Tibet, the Middle East and other regions have the most abundant solar energy resources. Usually, people express the abundance of solar energy in a certain area by the total annual radiation (unit is kcal/(cm2·a) or kW/(cm2·a)) and the total sunshine hours in the year.
China has a vast land, abundant resources and vast territory. The annual solar radiation energy received by the land area is about 5.0×109kJ, which is equivalent to the energy released by the complete combustion of 2.4 trillion tons of standard coal. The annual sunshine hours in more than 2/3 of the country’s total area are more than 2000h. In general, the high and low value centers of solar energy in China are located in the area of ​​22°~35° north latitude. The Qinghai-Tibet Plateau is the high value center, and the Sichuan Basin is the low value center; , and except for the two autonomous regions of Tibet and Xinjiang, due to the cloudy, foggy and rainy areas in most areas in the south, in the 30°~40° north latitude area, the distribution of solar energy is contrary to the general law of solar energy changing with latitude, basically lower than that in the south. north. Studies have shown that the areas with economic value in the utilization of solar energy are the areas where the annual solar radiation time is higher than 2200h. Therefore, the promotion and application of solar energy technology in most areas in our country has good resource conditions, especially in areas with power shortages. It has a good economic effect. and social effects. According to the amount of solar radiation, my country can be divided into five types of regions, as shown in Table 1.

According to the five types of regions given in Table 1, China divides the solar energy distribution area into five corresponding levels. Among them, the first, second and third are areas rich in solar energy, accounting for more than 2/3 of China’s total area. Although the conditions of solar energy resources in the fourth and fifth regions are relatively poor, they still have certain utilization value. It can be seen that China’s solar energy resources are very rich. The Tibetan Plateau is one of the high-value centers of sunshine hours in China, with an average annual sunshine hours of 1500-3400 hours. Chinese solar researchers have conducted a comprehensive assessment of the solar energy resources in Tibet. Figure 2 shows the annual change curve of the monthly total solar radiation in Tibet. Further research shows that the seasonal variation of total solar radiation is the largest in spring and summer, and the smallest in autumn and winter. The total solar radiation in the rainy season (May to September) accounts for 46% to 49% of the whole year.