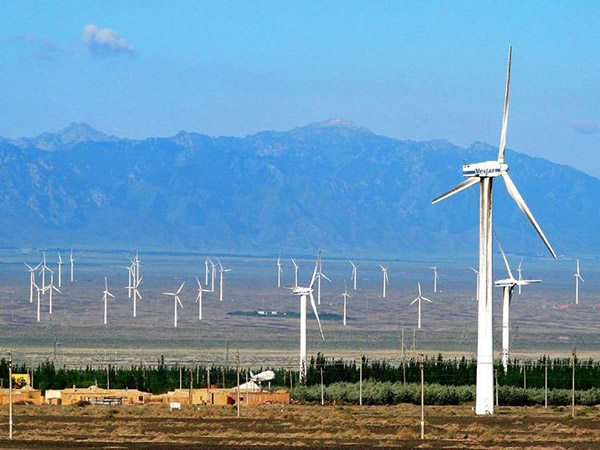 The primary problem in building a wind farm is site selection. The site selection requirements for wind farms are very strict. Usually, the following points need to be considered:

(2) Detailed assessment of the topography and obstacles in the field, the surface roughness, the distribution of trees and surrounding buildings in the field will affect the power generation of the wind farm;

(3) The wind farm should choose a place close to the road, which is convenient for the transportation and installation of wind power equipment, which can not only reduce the cost, but also facilitate the travel of the staff. At the same time, wind farms should also choose places close to the local power grid, which can facilitate access to the power grid and reduce costs.

(4) To measure and make statistics on other meteorological data affecting the power and safe and reliable operation of wind turbines in the field, such as temperature, atmospheric pressure, humidity, and the possibility and frequency of occurrence of typhoons, lightning, sandstorms, earthquakes, floods, landslides, etc., and the length of freezing time; For offshore wind power, seawater salt spray should be assessed.

(6) In today’s society, many things cannot be successfully completed without the support and cooperation of the government, and the construction of wind farms is particularly prominent in this regard. Government support will have a very important impact on the construction and development of wind farms.

(7) When the wind turbine is running, the noise from the gearbox and generator, as well as the noise generated by the air swept by the blades of the wind rotor, will cause dissatisfaction among residents. Therefore, the location of the wind farm should not be too close to the residential area.

It is necessary to point out that compared with onshore wind farms, the construction of offshore wind farms is more technically difficult, and the generated energy needs to be transmitted by laying submarine cables. The main advantages of offshore wind farms are that they do not occupy valuable land resources, are basically unaffected by topography, have higher wind speeds, more abundant wind energy resources, larger single-unit capacity of wind turbines, and higher annual utilization hours.

In addition, when building a wind farm, the local topography should be considered. On the one hand, try to avoid areas such as mountains and forests that have a greater impact on wind speed. When the wind turbine is installed in a relatively flat area, with the installation site as the center, there should be no obvious obstacles in the circle with a radius of 0.5~1km (small wind turbines can be reduced to 0.4km), if there are hills and woods, it should be handled as shown in Figure 1. On the other hand, when the airflow passes through the platform or mountain, it forms a flow around the flow. When there is an acceleration zone and a pro-current, the wind turbine should be installed in the area with the highest wind speed, and remember not to install it in the pro-current zone.

35Figure 1 – Installation distance between wind turbine and hills and woods