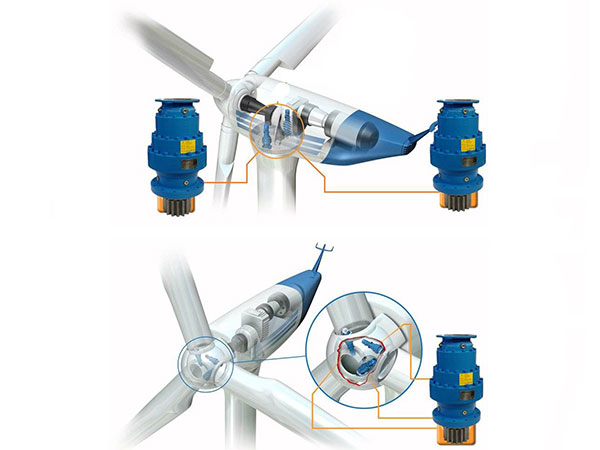 Since the rotation of the wind turbine is driven by the wind, it is not difficult to imagine that only when the wind blows vertically to the rotating surface of the wind wheel, the wind turbine can obtain the maximum rotational torque and output the maximum mechanical power. As we all know, the wind in nature changes frequently in both speed and direction. For horizontal axis wind turbines, in order to obtain the highest wind energy utilization efficiency, the rotating surface of the wind wheel should always be aligned with the wind direction. Except for downwind wind turbines, it is generally necessary to take special measures to achieve the function of wind resistance. For small-capacity wind turbines, a rudder similar to a wind vane (also called a tail) is often installed behind the wind wheel to realize the function of anti-wind. The material of the rudder is usually galvanized sheet steel. For a wind turbine with a relatively large capacity, it is usually equipped with a special anti-wind device-a yaw system (also called a steering system). When the wind direction changes, the yaw system can ensure that the wind wheel follows the rotation, and the wind wheel is automatically aligned to the main wind direction through the command of the control system. The yaw system is one of the indispensable components of modern large-scale horizontal-axis wind turbines. It is composed of a wind direction sensor and a servo motor. Its main functions are as follows:

(2) Provide the necessary locking torque to ensure the safe operation of the wind turbine. Generally, the yaw control system mainly includes functions such as automatic yaw, manual yaw of 90°, crosswind, and automatic untwisting. The details are as follows:

③ Cross wind at 90°. When the wind turbine is overspeed or encounters a strong wind above the cut-out wind speed, in order to protect the safety of the wind turbine, the control system performs a 90° crosswind yaw to the nacelle. At this time, the cabin should be made to take the shortest path to reach a 90° crosswind state, and the automatic yaw command should be shielded. After the crosswind is over, you should hold the yaw brake disc tightly, and continue to track the change in wind direction when the wind direction changes.

④ Automatic unwinding. Automatic unraveling is a control process that automatically unravels the twisted cable. When the yaw controller detects that the cable torsion reaches a certain number of turns (such as 2.5 to 3.5 turns, it can be set as required), if the wind turbine is in a pause or start state, it will unwind the cable; if it is running, the central controller does not allow to unmoor, and the yaw system continues to track the wind. When the number of twisting turns of the cable reaches the protection limit (such as 3 to 4 turns), the yaw controller requests the central controller to shut down normally and perform un-cable operation. After the untwisting is completed, the yaw system sends out the untwisting complete signal.