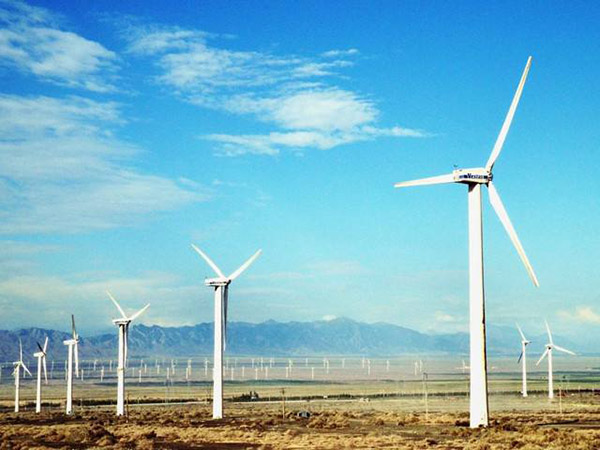 Concept and development of wind farms

The concept of wind farms was proposed in the United States in the 1970s and quickly spread around the world. Today, wind farms have become one of the effective ways to utilize wind energy on a large scale.

Due to the low density of wind energy, it is not easy for a single wind turbine to achieve large-capacity wind energy acquisition and power output. Therefore, in areas rich in wind resources, dozens to thousands of wind turbines with large single capacity are often installed in specific sites, and arranged in an array according to the terrain and the main wind direction to form a generator group to generate a large amount of electricity and send it to the grid. This kind of wind power generation site is called a wind farm. A wind farm is a general term for all wind power equipment and supporting facilities built in a specific area. Wind farms have the characteristics of small unit capacity and large number of units. For example, to build a wind farm with an installed capacity of 50,000 kW, if the 1.5MW large-capacity units with relatively mature technology are used, 33 wind turbines are needed.

Due to the small capacity of a single unit and a large number of units in a wind farm, a special power collection system is required to collect the electrical energy output by many wind turbines and transmit it to the power system uniformly. At present, the output voltage of the mainstream wind turbines is generally 690V. In order to transmit the produced electric energy efficiently, wind farms generally use two-stage or three-stage transformation, that is, the electric energy produced by a single wind turbine is boosted to 10~35kv by a step-up transformer at the installation place. The wind turbines are then collected by the power collection system in groups according to their geographical locations, and each group is collected as a way to send it to the booster substation in the wind farm. Finally, the voltage is raised again by the step-up substation to deliver the electrical energy to the power system.

The electrical system of a wind farm is composed of a large number of electrical devices, which are connected to each other as a whole, forming an energy transmission path from production to output and even consumption. The functions of these electrical devices vary and are classified according to their different roles as follows:

(2) Secondary equipment. Specifically, it refers to the equipment that measures, controls, monitors and protects the primary system, including transformers, measuring instruments, and relay protection. Secondary devices are connected to each other to form a secondary system.

The grid-connected wind farms can be compensated and supported by the large power grid, which is conducive to more fully exploiting the available wind resources, and is the main development direction of wind electric power generation in various countries. In an increasingly open electricity market environment, the cost of wind power will also continue to decrease. If indirect benefits brought by factors such as the environment are considered, wind power is also economically attractive.