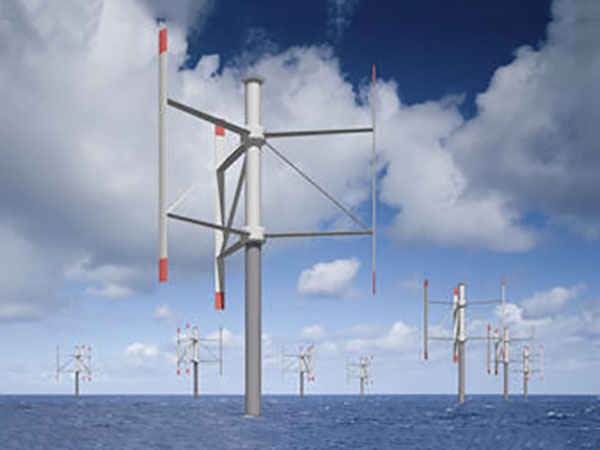 There are many different types of horizontal-axis wind turbines, as shown in Figure 2, which shows the most common models currently on the market. In terms of the number of blades, there are single-blade, double-blade, three-blade and multi-blade, etc. At present, three-blade is the most common in large-capacity wind turbines. The rotor of a horizontal axis wind turbine can be installed in the upwind direction (also known as the upwind type) or downwind (also known as the downwind type). The advantage of the downwind type is that it can automatically face the wind and does not require a yaw system. However, the wind must pass through the tower before reaching the wind wheel, which is greatly affected by the tower shadow effect. In addition, practical experience shows that when the wind direction changes suddenly, it is difficult for the wind wheel to adjust its direction in time. Therefore, upwind wind turbines are more common. The upwind horizontal axis wind power generation system must have a yaw mechanism to rotate the wind turbine rotor and nacelle. During normal operation, the wind turbine rotor should face the direction of the incoming wind so as to capture as much wind energy as possible. For small-capacity wind turbines, the yaw system is very simple, but for large-capacity wind turbines, the yaw system is more complicated.

Constant speed wind turbine means that its speed is constant during normal operation. In the early days, wind turbine systems mostly used induction generators or synchronous generators, and the stator windings were connected to the grid. Therefore, the rotation speed of the generator is determined by the frequency of the power grid and cannot be reduced regularly. Although it is relatively simple to control, the utilization rate of wind energy is low.

With the development of power electronics and other technologies, doubly-fed asynchronous generators have emerged, which can maintain the constant output frequency of the stator group at different rotor speeds by controlling the frequency of the current in the rotor windings. Therefore, it allows the wind turbine speed to vary within a larger range, so it is called a variable speed constant frequency wind turbine. The recently developed low-speed direct-drive permanent magnet synchronous generator is a typical variable-speed constant-frequency wind turbine, because it outputs electrical energy from a full-capacity power electronic power rate converter, and its output frequency is determined by the inverter. Therefore, the rotation speed of the wind turbine is allowed to change in a wide range. The main advantages of variable speed wind turbines include high wind E efficiency, low mechanical stress, high power quality, and low noise.

The blades of the variable pitch wind turbine can rotate freely relative to the wheel, thereby changing the pitch angle. The advantage of the variable pitch wind turbine is that it is easy to control the wind turbine to absorb power from the wind. Therefore, the power regulation performance is good, but it needs a set of special pitch machine (with hydraulic servo and electric servo pitch mechanism), the structure and control are more complicated, and the cost is higher.